As you journey down the highways and rural routes and explore the numerous towns and Villages of Southern Georgian Bay, you may notice the large number of church buildings along the way. They come in all shapes and sizes, from the large modern brick structure to the small frame one-room buildings with adjacent graveyards. Most of these churches still hold services on Sundays, while a few are now vacant and unused due to changing times and shifting populations. Still, others have been converted into living quarters or put to other uses. Many of these structures have interesting histories, but only a few have truly fascinating, little known stories to tell. 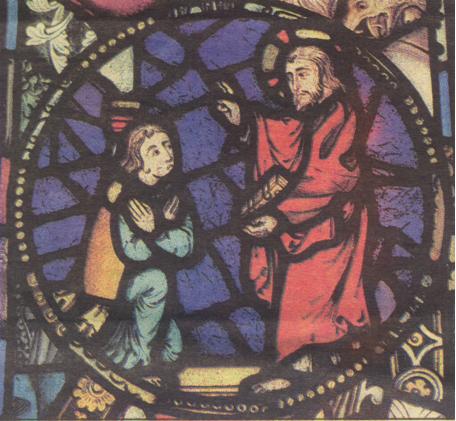 One of these is Christ Church Anglican – and its memorial windows. These windows were not just created in Canada and dedicated during service, they are actually a part of the destruction caused in several countries during World War II and are considered to be one of the most beautiful memorials in the world.

The first Anglican service in Meaford was held in 1856, and once a year thereafter in Stephenson’s Inn. A small frame building was built in 1861, and was consecrated in 1862. The total cost of this construction was $600.00. The stone building still used today was completed in 1876.

Reverend Harold Appleyard became rector of the church in 1938, and hoped to be there for a long time. However, after the war broke out in 1939 he heard about the young men from Meaford losing their lives overseas and decided he would be able to serve better over there. In 1941 as a military chaplain with the honorary rank of Captain, he was posted to southern England in July of 1942.

The destruction in the area appalled him, especially the churches and the beautiful shards of glass from their shattered windows. He soon came up with the idea of collecting these fragments of coloured glass, some of which were centuries old, and have them crafted into memorial windows made for his church in Meaford. He spoke to Mr. G. S. Sherrin who was responsible for the ancient churches of London, who referred him to Cox and Bernard Stained Glass Works. Mr. Cox agreed to design and re-lead the glass to fit Christ Church Meaford free of charge in gratitude to the Canadians for their part in the war effort.

For the duration of the war he spent his spare time digging through ruins, finding his treasures, cleaning, labelling, and cataloguing the pieces. He stored them in a small metal trunk and continued his quest as he traveled with his regiment to Holland, Belgium, France, Ireland and Wales. He was also able to salvage a piece of an oak pew from Christ Church, Westminster, London. It was burnt and charred but Rev. Appleyard cleaned it up and had the names of the members of his congregation who had paid the supreme sacrifice engraved upon it.

Before going with his troops on the D-Day invasion he left all his pieces of glass with Mr. Cox and they agreed on designs for two windows that would fit in the sanctuary in the church in Meaford. After the war he returned to his perish and the citizens of Meaford erected a stage in front of the Town Hall for the Governor General to award him with the Military Cross for ”calm courage, disregard of his own safety, and steadfastness of purpose”.

Two mothers who had lost sons in the war unveiled the windows on August 11, 1946 to a packed church of which the service was broadcast on CBC radio. Later it was also heard in the British Isles and Europe.

As well as the two memorial windows and plaque, you will find three more windows in a cloister between the church and the parish hall. The one on the left is made entirely from glass from Cathedrals and has a large center panel from Canterbury Cathedral. It was donated to Rev. Appleyard by the Dean and Chapter in 1943. The window on the right is chiefly made up of glass from a church designed by 19th century architect Sir Christopher Wren and was donated by Mr. Sherrin.

In gratitude for his safe return home, Appleyard donated the center window to the Church. The windows are meant to depict the destruction of a pagan philosophy wrought on the Christian way of life and show the necessity of Christians gathering their resources and building a new world that, despite the marks of suffering, will have beauty of character and glorify God.

If you would like to see these windows for yourself, the church is open to visitors during July and August from 2 pm to 4 pm on Tuesday, Wednesday, Thursday & Friday. From January-June and September-December, they are open Thursday and Friday mornings from 10:00 am-12:00 pm. For more information call 519-538-1330. For guided tours or special appointments please call 519-538-3365.